Venerable in age and young at heart, Greece's second city rewards those who follow their noses into bakeries and hidden backstreets, or wander through secret doorways and down into crypts. Uncover the best of Thessaloniki on a weekend away, with our guide to the top things to see, do and eat...

City breaks in Thessaloniki are best begun at this square on the waterfront, boasting some of the city’s most beautiful buildings and sights, not least the open expanse of the Thermaikos Gulf. Take your pick of al fresco restaurants and bars to enjoy the atmosphere, or head up to the roof terrace at the Electra Palace Hotel for a coffee with a view.

Named after the half-sister of Alexander the Great, Thessaloniki was once part of the powerful kingdom of Ancient Macedonia and as you might expect, has a fascinating story behind it. Learn more at this comprehensive museum, split into seven eras from prehistoric to the early Christian period (around 300AD) and arranged chronologically from bottom floor to top. There are both antiquities to marvel at, and modern multimedia exhibits to provide context and you’ll find great insights into a city at the height of its significance during the Hellenistic period and later as a Roman metropolis.

Breakfast on the go like a proper local – koulouri is just the thing to set you up for another day touring Thessaloniki attractions. Stalls on many a street corner sell these pretzel-like sesame dough rings, which were allegedly invented in the city. A bready bargain at an average of 60¢ a pop. Get there early at Koukos on Vogatsikou to try their freshly-baked version. Fan of street food? Take a look at these tasty – and sometimes terrifying – treats from 12 top foodie destinations around the world.

4. Arch of Galerius and Rotunda

These original Roman structures from the time of Emperor Galerius (fourth century AD) originally formed part of the same grand complex. Look out for hand-carved battle scenes on the pillars of the Arch, depicting events from the Persian campaign of 298 AD. The Rotunda is an impressively stout building which has been a Roman temple, a Christian house of worship and a mosque in its time, as well as surviving several earthquakes with its beautiful mosaics and 30m-high dome intact.

Ano Poli, or the Upper Town is sweaty to get to (get the 23 bus to save time on a short break in Thessaloniki), but this is the most atmospheric, if confusing, portion of the city, largely undamaged by the great fire of 1917. Up here you can amble amid Ottoman alleyways, and climb the stairs following the old city walls up to the Heptapyrgion, a run-down but evocative Venetian fortress. It once formed the main citadel, or Acropolis of Thessaloniki, during the medieval period, and more recently, served as a prison until 1988. 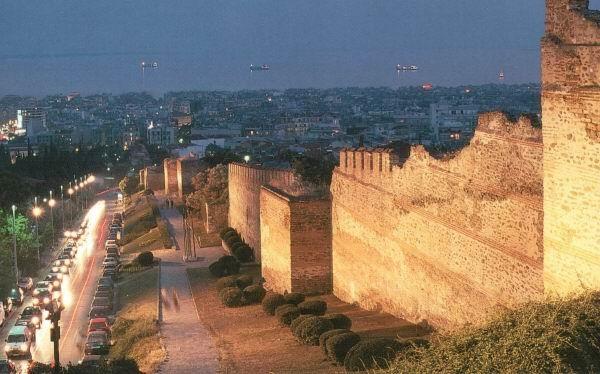 Spend a little longer in Ano Poli to take in one of Thessaloniki’s most tranquil attractions. Today only the chancery of the original fourteenth century Vlatadon Monstery remains, but this was once the same site where St Paul preached in AD51. Inside you can still see Byzantine frescoes, though arguably the finest sight is the panorama of the city you can see from here, stretching all the way to Mount Olympus on a fine day. 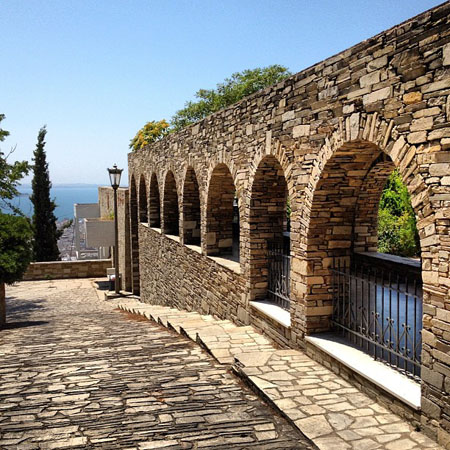 One of the oldest Byzantine churches in Thessaloniki, this domed basilica has weathered all kinds of social and political upheaval, from the Iconoclastic wars to the Crusades to Ottoman rule, and was restored after the 1917 fire. Hagia Sophia is somewhat more impressive inside than out, revealing gorgeous wall-to-wall decoration in the form of mosaics and paintings dating back as far as the eleventh century. 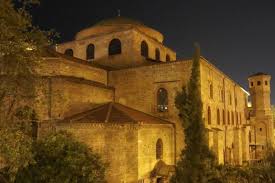 Thessaloniki has the largest student population in Greece and a lively vibe as a result. Young people – as well as street artists, buskers and people-watchers of all ages – like to hang out on pedestrianised Dimitriou Gounari, or in Navarinou Square, at the heart of the thoroughfare and home to the ruins of the Galerius Palace. While you’re in the neighbourhood, nip down to Elenidis, a no-frills bakery serving the city’s best trigona panoramatos – cream-filled triangles of tooth-decaying sweetness. 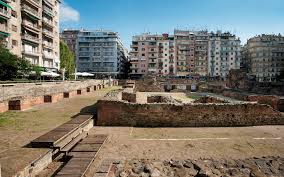 The solid, stocky White Tower guards the waterfront as it has done for more than 600 years and is the most recognisable symbol of Thessaloniki. Built by the Ottomans, the 34m tall turret once punctuated a protective sea wall. It also served as a prison where thousands of rebels were slaughtered; at that time, it was known as the Red Tower. It’s not so bloody now – there’s a museum inside and good views from the top out into the Aegean Sea.

The centre of slope-stacked Thessaloniki slides down to the Thermaic Gulf and the point where land meets sea used to be pretty tatty. But in late 2013 a regenerated waterfront reopened: 5km of spruced up shoreline, freshly paved for walkers and cyclists, interspersed with alfresco art and backed by a series of thematic parks. It’s the place to prom of a summer’s evening – and in winter too, if you can brave the chill vardaris wind.

These two clusters of commerce virtually segue into each other, located in the middle of the city near Aristotelous Plaza. Between them, they purvey the very best produce from Thessaloniki: fish fresh off the boats, creamy cheeses, olives of all sorts and sizes and piles of herbs and spices. Small tavernas and bars line the edges serving thick coffee and breakfast bougatsa (filo pastry filled with semolina cream). 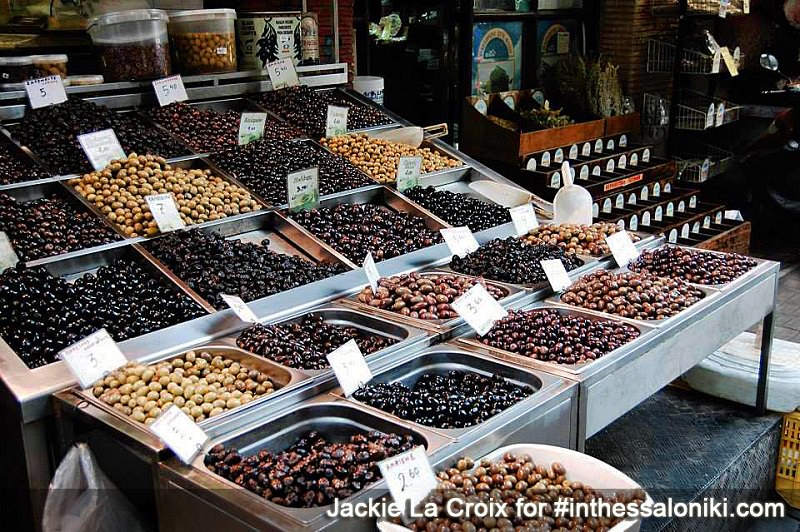 Mediterranean Cosmos is the biggest shopping mall of Thessaloniki and one of the biggest in Greece.

Located 11 km east of the city centre you will easily find it by follwing the city’s ringroad. It first opened it’s doors in October 2005.

Since then, it has made its way to the residents daily life and it is now a very popular destination not only for the locals, but also for residents of nearby cities and towns and for tourists heading to Chalkidiki that stop by.

A wonderful shopping experience for everyone

Apart from approximately 200 stores, it also features 30 restaurants and coffee shops, 11 multiplex cinemas, a playroom for kids, a large super market, hairdressers & manicure services, a church and so on.

It is considered by far one of the best family friendly destinations! 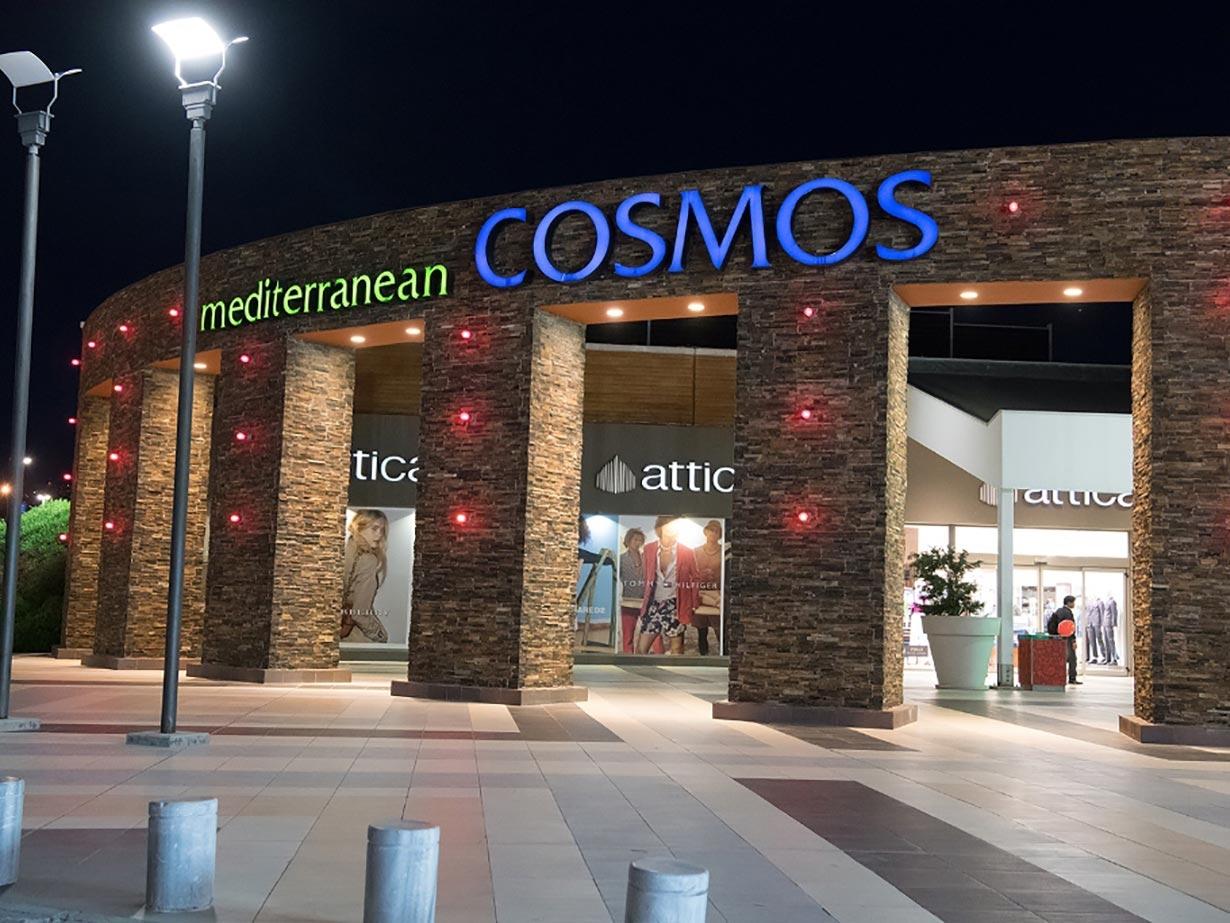 Mediterranean Cosmos is an ideal shopping destination that will satisfy most visitors. If you feel like taking a break, you’ll find many cafe and fast food restaurants all around

While this foodie paradise is an attraction on its own, don’t miss the chance to take your time and enjoy a coffee outside, especially on a sunny day!

Although it is located outside the city centre relatively far from other malls and shopping areas of Thessaloniki, as a result of the variety of stores and activities that it features, Mediterranean Cosmos is a quite busy shopping destination, especially during Friday afternoons and of course on Saturdays.

The decoration inside Mediterranean Cosmos is smart and colorful. It is family friendly and changes regularly, while there are several places available for relaxing

The Mall offers large parking space for cars, motorcycles and buses. The parking fee is 2€ for all day. The parking uses automated validation ticket system. First you print the ticket at the entrance by pressing the ticket button and you pay on your way out.  If you visit the Mall after 20:00 the parking is free (no charge). Up to 30′ minutes is also free as well as on Sundays.

Getting there by car is the easiest way (for car rental services click here ). Check out the map on the right for directions. If you want to use public transportation, the bus lines that service Mediterranean Cosmos are No. 36 and No. 45.