The hometown of the modern civilization pioneer-philosopher

Ancient Stageira is the most important archaeological site of Halkidiki. Located at Olympiada town, in the Liotopi peninsula, visiting Aristotle’s hometown is a journey back in time. In order to miss nothing you need less than 3 hours. Do not leave before walking along the marvelous seaside path. Ionian settlers from Andros Island founded the city in 655 B.C. Colonists from Halkida settled in before the end of the 7th century. The sources (Herodotus, Thucydides, Plutarch and Strabo) provide information about the city. Strabo (“Geographics”) specifies the Stageira city location in the coastal area north of ancient Akanthos (nowadays Ierissos) mentioning an islet just off the coast of the city named Capros (probably the nowadays Kafkanas Islet). The fact that the same name is attributed to the port of Stageira is a feature, whereas many coins bear the symbol of a boar (wild pig).

After the end of the Persian Wars, Stageira allied with Athens, despite their limited potential to financially contribute in the First Athenian Alliance. However, in 424 B.C. during the Peloponnesian War, the city apostatized, allied with the Spartans after given in to General Vrasidas. He presented himself the savior-liberator of the local population partly effected, once they were looking for an alternative to the Athenian economic oppression.

Vrasidas’ plan was to divide the Macedonian and Thracian allies of Athens. He conquered Akanthos as much as Amfipolis, one of the most important Athenian colonies. In spring 423 B.C., Athens and Sparta signed a truce but Vrasidas refused to aline. In April of 422 B.C., the truce ended and Athenians sent an expeditionary force (under Cleon) to recapture the lost properties in northern Greece. However, Vrasidas crashed the Athenians in Amfipolis, where he and his opponent Cleon were both killed. Thus, Stageira never joined the Athenian Alliance again. Later, Stageira joined the “Common of Halkidians”, the confederation of Halkidiki towns based in the capital Olynthos. Philip II, father of Alexander the Great, leveled the city during the Olynthian War, 349 B.C. Reconstructed the city though, according to Aristotle’s request who had just been employed to educate Alexander and his companions and future Macedonian army leaders. According to other sources, the city was probably rebuilt by Alexander the Great himself.

Despite the later reconstruction of the city, this disaster marked the start of decline. The city was deserted during the Greco-Roman era. It is worth noting that Strabo (63 B.C.-23 A.D.) states that Stageira was already deserted when he visited.

The construction of the Livasdia or Lipsasda medieval castle around 1000 A.D. is reported where the ancient city still laying. The visitor can nowadays see the remains of some buildings on the northern slope of the archaeological site, as well as the small part of the byzantine walling on the hill footpath.

When Aristotle passed away in 322 B.C., in Halkida, his body was transferred to his hometown, Stageira, where he was buried with great honors. He was declared the “founder” of the city and an altar was built on his tomb. In fact, they established the “Aristoteleia Celebrations” to honor him. Nowadays, local authorities and other agencies attempt to revive the “Aristoteleia”.

The first excavation in ancient Stageira took place in the end of 1960 and still continue bringing important findings to light. The recent restoration program of the XVI Ephorate of Prehistoric and Classic Antiquities, which will offer access to a part of the wall that includes a circular tower and the large rectangular tower, is interesting. The XVI Ephorate of Prehistoric and Classic Antiquities, under K. Sismanidis (director-archaeologist) excavated, configured and restored ancient Stagira (1990-2000). The late 60’s first excavations were attempted by F. Petsas. The archaeological museum of Polygyros exhibits the excavations’ findings. 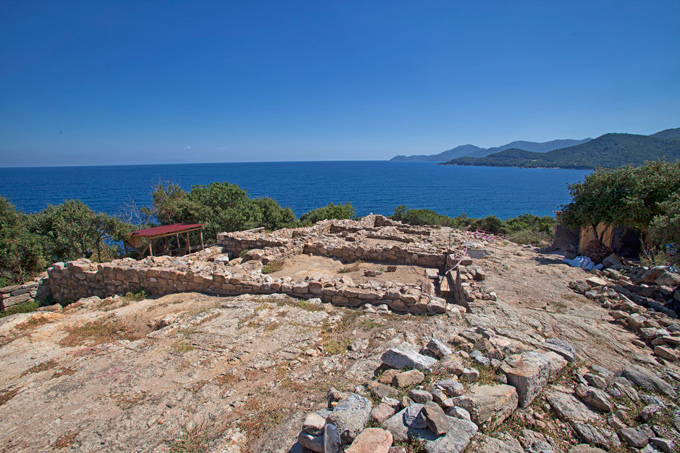